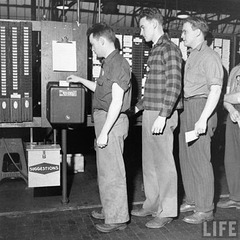 We talk a lot around here about how Congress is stuck in across-the-aisle squabbling and can’t seem to stop thinking about getting re-elected long enough to get any work done. So a story in the Los Angeles Times about a group of lawmakers who were actually doing their jobs caught our eye.

It seems that California legislators actually show up and pass bills and whatnot. Crazy. This week they passed a bill increasing the minimum wage over the next six years to reach $15 an hour. You may not like that particular bill, but Californians overall approve of what their congressional leaders have been able to get done – a 44% approval rating (versus numbers in the teens during the recession).

But that “rising tide” won’t be lifting all boats. Or trucks. About 65% of all truck drivers are considered independent contractors. They’re not bound by the new wage minimums. Nor do they get worker’s comp, healthcare, or unemployment insurance.

Flipping through the same issue of the LA Times (yeah, we’re old school), turned up a story about how some drivers are pushing back, demanding back pay for being “misclassified” as independent rather than employees.

We don’t claim to have the answer to how commercial vehicle operators should be paid. But we believe no matter what magic formula of per-mile/per-load/per-hour/per-whatever is being used, at the end of the week it should be a living wage for a job that supports the way we all live. We need all our lawmakers – local, state, and federal – to support a more equitable pay structure for truck drivers. Truck drivers are doing their jobs. Politicians should be doing theirs.

Tell us how you think drivers should be paid in the comments. We’re looking for options here.