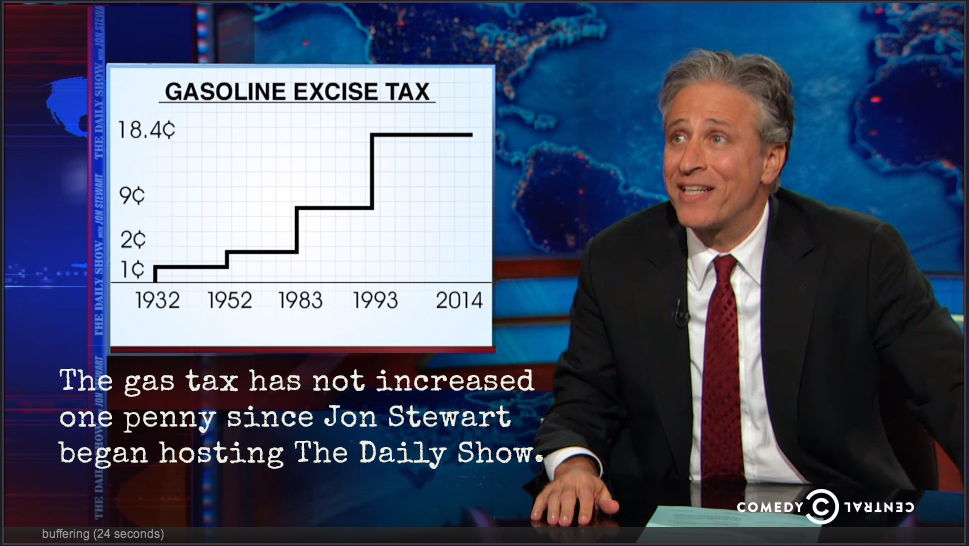 As we face our final few bittersweet days of watching Jon Stewart on The Daily Show, we thought we’d post a video clip from last summer that pretty much covers the ongoing struggle to get a Highway Trust Fund bill passed and funded.

The Daily Show
“First of all, I can’t believe our Federal Highways have a Trust Fund. Get a job!”

When Stewart took over The Daily Show in 1999, the gas tax was 18.4 cents per gallon and 24.4 cents per gallon for diesel. This week when he signs off after 16 and a half years behind the desk, fuel taxes will not have gone up one penny.

Adjusted for inflation, that 18.4 cents should now be about 27 cents per gallon (with diesel hitting 35 cents). That is not a huge increase. If we had just tied the 1993 tax increase to the rate of inflation, we wouldn’t now be looking at losing the Highway Trust Fund AND Jon Stewart in the same week.

Your elected Representatives and

your President are so convinced you won’t tolerate a gas tax increase that they won’t even talk about it. With fuel efficiency increasing (which will impact how much revenue can be gathered from a fuel tax), economists are calling for a mileage tax – a straightforward pay-by-the-mile usage fee. But officials are convinced you won’t tolerate that either. Toll roads? License fees? Apparently, they’re certain you don’t like those either. Here at Be Prepared to Stop we think it’s time to speak up and tell our leaders what we DO want.

We all know our roads and bridges are overburdened and beat up. For decades we’ve literally been riding on our grandparents’ highway system. They were willing to pay a price so our interstates were second to none. Now it’s our turn to take the wheel and steer our country towards the high-tech, multi-faceted transit system our grandchildren can be proud of.

Tell us your thoughts on how to support the repair, maintenance, and expansion of our roads and bridges – either in the comments below or on Facebook or Twitter. Click here for links to tell your Representatives and Senators. Tell President Obama.

Let them know you’re watching and you’re ready to roll!